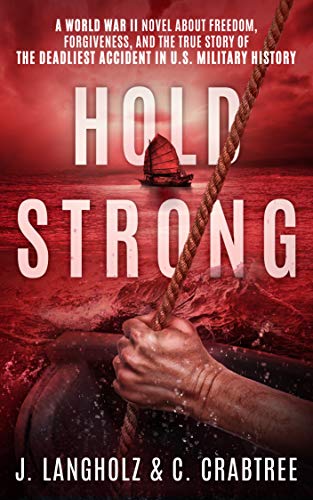 Were I tempted to write about Thomas J. Scecina, the Catholic Priest who served as a POW in World War II, my good friend and Scecina High School graduate Chris Crabtree would have disabused me of that notion.

It’s not because Scecina is an unworthy subject for the words and sentences treatment. On the contrary. It’s only because Chris and Jeff Langholz have already delivered a portrait of Scecina so thorough that I wouldn’t dare try to follow.

Scecina is one of the central characters in their new book, Hold Strong. It’s a historical novel based on the mostly unexplored story of U.S. soldiers taken as prisoners of war in the Pacific Theater. The novel captures the story after the soldiers had endured the Bataan Death March, during their time on the Arisan Maru, a Japanese hellship for American POWs. It’s a harrowing tale that takes no shortcuts.

Through exhaustive research into materials unclassified 30 years after the war, combined with interviews they conducted, Chris and Jeff deliver a plausible explanation for some of the events surrounding the ships’ fates. I’ll spare you the details to allow you to discover the story on your own. But the novel digs into, and prompts meaningful questions about, the decisions made in combat, both at the strategic and individual levels, all the while keeping you riveted by the remarkable events as they transpire.

And for Catholics, the book does a marvelous job exploring Scecina’s commitment, and how he inspires the men around him in the face of horrific conditions. Chris and Jeff manage to do in this historical novel what I want to do with my project – present a compelling picture of our faith at work.

View all posts by Daniel